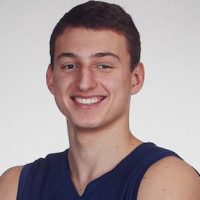 Are you Nikola Jovic?

STRENGTHS: Jovic plays extremely hard. He does a little bit of everything on the basketball court. At 6’10” Jovic is a big wing player that can initiate offense and finish plays both in full and the half court. He’s an excellent cutter and knows when to utilize those cutting abilities to score extra baskets. Jovic also displays the ability to pass the ball competently.
CONCERNS: Jovic could stand to add muscle to his 6’10’ frame for more functional strength to absorb contact and be more adept to play a more physical brand of basketball that he seems to embrace. Jovic also has average athleticism at best. Jovic hasn’t shot the ball nearly as well as we believe he’s capable of shooting it thus far. His success offensively is highly contingent upon making shots to attack poor closeouts. If his shoot isn’t falling then Jovic can have a tough time creating a lane to the basket off of the bounce against defenders.