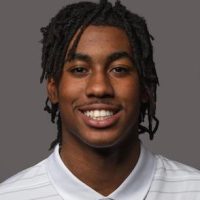 Are you Jaden Ivey?

PLAYER COMPARISON: Ja Morant, Russell Westbrook
UNDENIABLE SKILL: Elite athleticism, elite acceleration
STRENGTHS: Ivey possess elite athleticism which he fully utilizes on the basketball court. He is an absolute demon in transition. He also has a great feel for anticipating passes and uses his elite athleticism and anticipation skills to disrupt offenses by stealing the ball via passing lanes. Very high motor. Puts extreme pressure on defenses with his aggressive style of getting downhill and attacking the rim. Ivey passes well when driving with on time and on target passes while on the move. Has shown consistent growth in his ability to shoot from distance. When his 3 pt shot is falling he can be very tough to defend.
CONCERNS: Midrange shooting ability is basically non existent, however, Ivey is currently shooting over 40% from 3 this season on 5 attempts per game. Is this an outlier shooting year or is it more of a reliable indicator of future progress on his jumpshot? He’s an offensive tweaner. He may not be suited as a full time point guard making high level reads. Also, Ivey may not be a consistent enough shooter to play off guard. Ivey is a 3pt or at the rim type offensive player. When forced to take midrange jumpshots Ivey is shooting a paltry 27% from that area. Ivey could benefit greatly from incorporating more nuance into his shot creation ability than only using only speed to carve room for his shot.

Betting On Yourself with Jalen Brunson